Too Busy to Blog

Time for another (long overdue) update:
Although 2013 will be a relentlessly busy year, it will also be relentlessly productive. I'm looking forward to it.
Posted by Willy Nast at 10:09 PM No comments:

Remember a few months ago when I said a podcast was on the way? Well I wasn't kidding. Here's what I've been working on for the last month or two - a neato home recording studio:


Now all we have to do is record a theme song, schedule guests, decide on a format, and actually record ourselves talking.
Posted by Willy Nast at 12:21 AM No comments:

Time for a quick update:

Posted by Willy Nast at 3:46 PM No comments:

By now you’ve probably heard that Bill Cellini might get another trial. About two weeks ago, the Chicago Tribune reported that one of the other jurors concealed her criminal record during the jury selection process. Cellini’s lawyers have since filed for a mistrial.

In the wake of this news, the Angry Readers (i.e., regular people who leave comments) at the Chicago Tribune website have spoken: They’re angry at Judge Zagel for not ordering background checks on the jurors, at the prosecuting attorneys for not running checks themselves, and at defense attorney Dan Webb, whose mock surprise doesn't seem to be fooling anybody.

But the Angry Readers are most angry, by far, at the juror.

CLICK HERE TO READ MORE
Posted by Willy Nast at 6:35 PM No comments:

As some of you have already heard or read, I spent the last month serving as a juror on the Bill Cellini trial. The case in a nutshell: Cellini was involved in a conspiracy to extort a Hollywood movie producer named Tom Rosenberg; the objective was to get Rosenberg to pay a political contribution to then-governor Rod Blagojevich. After a three-week trial and three days of deliberation, our verdict was read; we convicted Bill Cellini on two of the four counts related to the conspiracy.

The above paragraph rings hollow. I have so much to say about this experience that I'm not really sure where to start. So I guess I'll begin by answering the question that many of those close to me have asked since the trial ended: will I write about it?

There's certainly enough material to write about: from Stuart Levine giving testimony on his double-life, to the racial undertones of the Allison Davis subplot, to the all-business federal prosecuting attorneys, to the old-school defense team, to the media coverage, to the unsettling feeling of seeing the sketch artist's rendition of my own face, to the three-day deliberation. And all that without even mentioning Bill Cellini.

Jury duty itself is an experience worth writing about. They call it a "duty" for a reason. It is not something one chooses to do, but something one does because it must be done. And carrying out that duty gives one less a sense of accomplishment than a sense of sobriety. One juror described it as one of the few opportunities we will ever have to profoundly affect the life of another human being. It's a responsibility that, on one hand, feels very surreal; and on the other hand feels very, well, real.

And then there's the obvious reason to write about the trial. Bill Cellini was one of the most powerful men in Illinois politics for over thirty years. The fact that I played a minor role in a pivotal moment in the history of this state is not lost on me.

There's a lot to think about and make sense of. I don't know when I'll have something worth posting here or publishing elsewhere. But I will write about it. To put it bluntly, sometimes life drops a Big Story in your lap. If I were to ignore it, I'd have no right to call myself a writer.

Strange Old Pictures of My Family 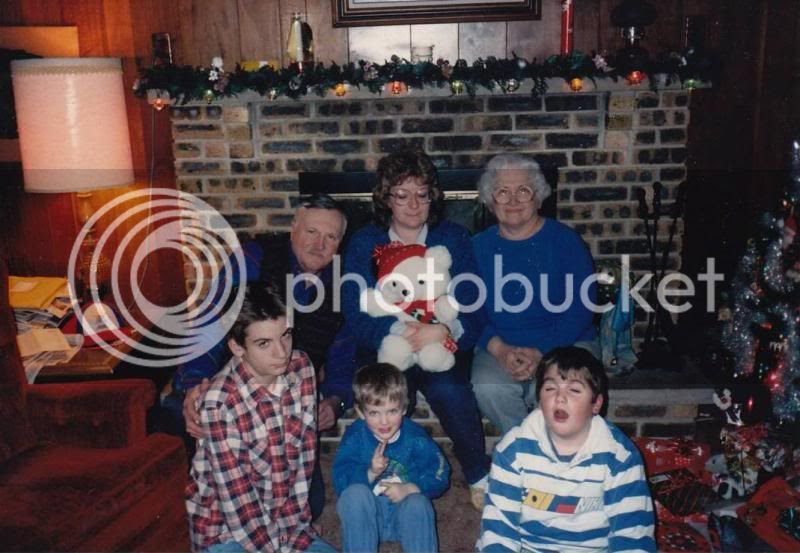 Last month, my grandfather passed away. On the day he died, we (my father's five siblings, their spouses, and every one of their twenty mostly-adult children) gathered at my grandfather's home. It wasn't long before one of my cousins had located my grandmother's photo albums, at least two dozen in all. We sat for hours in the living room, passing the photo albums around, laughing at how we all looked. (So many Cosby sweaters. So many mustaches. So many mullets.) Often I would get to the end of an album, and immediately start over from the beginning, sometimes taking more time to look through the album than I did the first time. I could hardly put them down. We stayed for a week, and not a day went by where I did not spend at least one hour looking through the albums.

Photo albums are a dying medium, which is too bad, because there's something intensely personal about them, far more personal than flipping through digital images on a camera or a computer screen. For one thing, most photo albums come from a time before you 1) could take as many pictures as you wanted, 2) could actually see the picture you got right after you took it (which is why so many pictures in photo albums are so weird - see example above - it's a tragedy that we're so quick to delete these kinds of shots from our digital cameras). Plus you had to incur the extra time and cost of getting the pictures developed. And all that came before you even get to the part where you put the pictures in the albums. Photo albums are too inconvenient these days. There are far too many overhead costs and barriers to production.

CLICK HERE TO READ MORE
Posted by Willy Nast at 10:40 PM No comments:

My Reading at Storylab Chicago

A couple nights ago I read at Storylab Chicago. Storylab is held in the back room of The Black Rock Pub - dark wood, fireplace, a few comfortable couches - it's a venue that feels like a place where stories should be told.

The place was packed and the audience was very receptive. I wrote something brand new for this reading and I was pretty pleased with the way it turned out. Click the play button below to hear it:


Hosted by kiwi6.com file hosting.
Download mp3 - Free File Hosting.
Thanks to Scott Whitehair for putting this show together and to the other readers for kicking ass.

Posted by Willy Nast at 6:10 PM No comments:

Willy Nast
I am a graduate of the Creative Non-Fiction Program at Northwestern University. Some day I will pay off all my student debt. I am shown in this picture eating a deep fried twinkie.